Posted at 15:20h in Politics, Share This!, Tech by deanna zandt 13 Comments

Today over at Gizmodo, blogger Joel Johnson posted what was intended to be encouragement and a challenge for his cohorts of the world to start following people who are different than them on Twitter: “Why I Stalk a Sexy Black Woman on Twitter (And Why You Should, Too).”

Conceptually, encouraging dominant cultures to divesify is fabulous –I subscribe to the DNA model of ecosystems and social spaces, so I support it wholeheartedly. As I’ve said in my book and recent talks:

This is a big one: you need to find people who don’t look like you, don’t necessarily think like you, and don’t come from the same places that you do. Creating a thrivable ecosystem–whether that’s an organization or a whole society–is like the evolution of a species. If you have a bunch of the same DNA mixing together, the species mutates poorly and eventually dies off. But bring in variety–new strains of DNA–and you create a stronger species. It’s no different in idea generation. You get a bunch of the same people talking to each other and making the rules for a few millennia, and eventually you’re going to end up with a lack of meaningful advancement.

We need you to be aware of the privilege you bring to the table – whether that’s your race, gender or your tech privilege – and make sure you’re using it responsibly and thoughtfully. Diversity is a strategic imperative for achieving collective goals. As diversity scholar Roosevelt Thomas notes, we all make better decisions–as individuals and as a society–when we account for differences and tensions.

But Johnson sort of, well, pretty much derails from the outset in his attempt. First, and I’m not going to focus on this too much, but “stalking?” Really? C’mon, we know that the world is loaded, painful and supports a culture of dominant violence. Not okay. But, moving along…

Where the argument really goes awry for me is in Johnson’s othering of the woman he follows. He’s turned her into an exotic creature on display, and taken away a little bit of her humanity. For more on exocitization, check out Racialicious’ extensive archive of awesome. There are plenty of ways to talk about race without placing people into positions that feel more like targets than participants.

This is largely about power relationships. Pretending that they don’t exist or don’t influence our decisions on how we interact with one another — especially when we’re different genders, races, sexualities, etc.– just mires us in he-said-she-said. It also perpetuates our bias, prejudices and social systems into the wild, open frontier of the Internet, and that’s a crying shame.

We’re living like fish in water on the Internet right now: We don’t know, or we’re not willing to recognize, that we’re soaking in the same social structures we’ve been living with for hundreds, maybe thousands, of years. We’re porting our understanding of the offline world–with all our prejudices, biases, and hierarchies–onto the blank canvas of the Internet. But all we can see is the blank canvas; we remain convinced that the Internet is a pure meritocracy and that if you just work hard enough, you’ll succeed at whatever it is that you’re trying to do. We’ve got to interrupt this pattern now, with conscious effort and action.

Lest I be a big ol’ bully and just rant about what’s wrong, allow me to offer some excerpts from my book that illustrate what I think is a healthier, more productive way to go about things. I’ll start with an example of where I was called out on my own voyeurism–shortly after the Philadelphia pool incident in 2009, and after listening on Twitter to lots of people of color share stories of childhood discrimination.

To share that kind of intimacy requires some sort of explicit or assumed “safe space”–a forum of sorts, where one can express views without threat of abuse or harassment. Safe space requires a tremendous amount of trust, and that trust allowed the people sharing the stories with each other to extend the conversation past the sound bite moments that get played out in media and other traditional public forums. “Usually when people of color talk publicly, it’s about our feelings, our mistakes, and being frank about our shortcomings,” says Ludovic Blain, director of the Progressive Era Project and a longtime social justice activist. “Often when white folks speak in the same setting, it’s about their initiatives and how they’ll make it right. That’s perverted. In the case of the racist pool, the scene was the same: people of color discussing heart-wrenching issues in front of whites. But those people were also doing a rare thing–publicly discussing what whites had done wrong.” The empathy based on shared experience, combined with trust that the conversation would be productive, brought this moment to a more necessarily intense place.

Additionally, people decided to share their stories for many reasons: to release a painful memory and get it off their chests, to connect with others who had experienced similar racism as children, to potentially educate those who needed to hear their memories, and more. Thus, the voyeuristic aspect of the experience was strong. My whiteness was hidden for a moment (via my silence, not sharing a common past experience), and social networks allowed me to enter a conversation that otherwise might have been altered by my presence. I was able to benefit regardless of whether the sharers intended for me to, and that cultural voyeurism needs to be clear when discussing issues that deal with bias around race, gender, class, and other kinds of privilege.

Later in the book, I discuss the kind of cross-pollination of culture that I believe Johnson originally intended to challenge his readers with.

To be clear, we won’t ever eliminate our biases. But we can begin to be explicit about what we learn about ourselves and our social spheres when bias rears its ugly head. Social technology researcher danah boyd suggests a series of questions for that explicit discovery process: “None of us is going to be unbiased. There is no way to be unbiased. The question is: Can you account for your biases? Can you recognize when they get in the way? Can you open up a dialogue, even if it makes you uncomfortable, with people who aren’t like you?” Opening ourselves up to that process and beginning to break out of the way we’ve been thinking about how we assume the world operates (simply because it’s operated like that for a long time) is crucial. We need to listen as selflessly as possible to what others are sharing and make sure that we’re not perpetuating restrictive social structures. … It makes me realize that often those moments are not about me at all–they are about larger injustices that I have a role in changing or stopping altogether, and it’s my job to figure out how to do that.

It’s important for people of all stripes and places to engage with those who are different from themselves, but to be blunt, it’s extra important for those who are a couple of notches up on the hierarchy to go through this exercise. Remember, you’re not there as part of some sociology experiment, but because you get that progress is possible only when we participate.

A crucial part of cross-pollination exercises is realizing that your role as ambassador is not to defend your position in the food chain. That’s where a lot of us get into trouble–I know I have. Your job is to recognize what privilege you bring–whether it’s your gender, your class, your race, your sexuality, etc.–and figure out how best you can use it to enable justice for people who don’t share your privilege. Jessica Hoffman, editor of make/shift magazine, pithily captured our collective responsibility to engage in self-reflection in an article she wrote about a white feminist’s role in other social justice movements: “Inexperienced because of privilege, we hadn’t thought well on our feet, and we’d been in a certain denial about how bad things might get; we’d been pissed and well meaning, but not useful [emphasis mine].” It’s the job of all of us to be useful.

Johnson’s utter failure to be useful is instructive of the larger systemic issues we face, not the least of which is the truism, “The road to hell is paved with good intentions.” A tweet from last year comes to mind on why this is true. 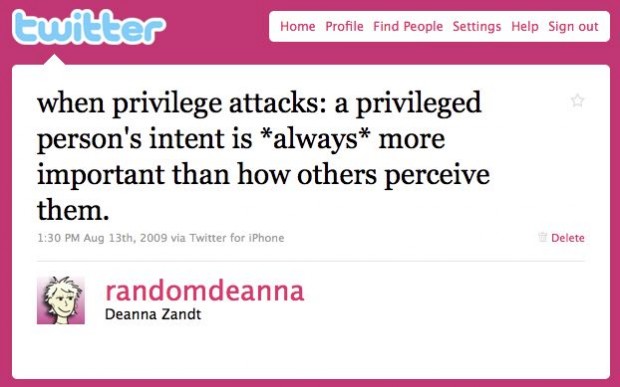