An overachiever’s guide to prepping for an Ignite talk

Posted at 11:47h in Performance, Share This!, Tech by deanna zandt 2 Comments 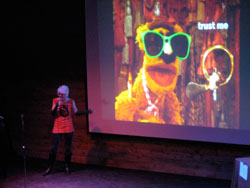 (note: You can look at the slides and text here; here’s the video.)

A week and a half ago, I received an email asking me if I’d be willing to do an Ignite talk for the March 4 NYC event, part of Global Ignite Week. If you’re not familiar with Ignite, here’s the deal: You have 5 minutes to give your talk; you create a PowerPoint presentation to go with the talk, but here’s the kicker: You must do 20 slides, and the slides will advance automatically every 15 seconds. Talk about creative restraint inspiration! Not only is it an amazing challenge and a great place to flex your speaker muscles, but the Ignite platform also reaches far and wide into multiple communities, and can be a huge opportunity to reach lots of audiences with your message. Was I up for it? Sure.

Then the panic set in. Oh my God, what I have I signed myself up for?

Tikva Morowati, one of the organizers of the event, said she needed my topic and description by later that day. Yeep. I knew I would have a hard time getting this all together on my own, so, like any good social citizen, I went to my community. First thing I did was email a listserv I belong to, where I knew many of the women had given Ignite talks before, for advice. The takeaways:

Next thing I did was beg the most entertaining stage performer I know, Baratunde Thurston, to spend a few minutes with me that day. I needed a crash course in both topic generation — how to create a message that was going to be true to how seriously I take my work, and be engaging/fun — as well as pointers on how to set up the talk itself. He generously took time to have a little lunch and run through some ideas. His advice? Make sure you tell a story people can insert themselves into. Also, consider giving counter examples to what you want to illustrate.

I knew I wanted to talk about how social networks are shifting our cultural consciousness, a huge chunk of what I cover in Share This!. Baratunde and I came up with the idea to base it around a pop song, make that the hook of the talk. On my way home from our meeting, I scrolled through my iPod looking for songs, and landed on, “It’s Not Easy Being Green.”

Of course! The Muppets! And who better to be my model social citizen than Kermit himself?

I quickly drafted a title — “What Would Kermit Do? How Being a Muppet on Social Networks Can Change the World” — and a description, and got to work on the actual talk. Now, a word about my prep: I’m a recovering overachiever. I was that kid in school that would do the most outrageous OCD acts to learn material and concepts inside out– think Tracy Flick for academics. I’ve been in recovery for a number of years now, but Ignite made me relapse. (In a good way, I hope.)

Melissa Pierce, who’s making an unbelievably awesome film called “Life In Perpetual Beta,” offered to bounce ideas around with me. I can’t stress enough how much the buddy system helped, here–throughout the process, every panic was eased by checking in quickly with my buddy. She sent me this great video, “Why and How to Give an Ignite Talk,” which stresses storytelling as the basis of every talk.

I looked up how many words a 5-minute talk was, and most sources agreed that it was somewhere around 700-800 words. So, I drafted a 750-word piece around what I wanted to say. Melissa and I moved things around a bit, and then I set to timing myself reading the whole piece and editing it until it was just under 5 minutes. Then, I timed out where the 15 second breaks roughly were, and broke up the talk in my document editor.

Then came the fun part. I knew that I wanted the visuals to be strong, and the words to be few. Thus, I set about to watching the Muppet Movie (which was the focal point for the whole talk) and finding stills that would work for each slot. Because I knew the movie inside out (I’m talkin’, nearly word for word), this part was easy. Once the stills were gathered, I dropped them all in Photoshop and added the text for each–I don’t like the way PowerPoint does text; Photoshop gives me much more control. All in all, this part probably took me 6-7 hours.

I also landed on doing the idea of a tshirt — playing off the “Jesus is my homeboy” meme, I created “Kermit is my homeboy.” The kind people at Neighborhoodies.com, just up the way in DUMBO Brooklyn, let me know they could have it printed by Wednesday. Yay!

The overachiever then kicked into high gear. This was a technique that I’ve used to memorize all kinds of things since I was probably 10 or 11 years old– scripts for acting roles, texts for oral exams, you name it. I made an MP3 of me reading the talk, and started listening to it whenever I could. On the train, walking around, etc. But the craziest part, which really seems to work for me, is that I listened to it on loop while I slept every night, from Monday to Wednesday nights.

I spent most of my waking practice time–probably an hour each day this week–trying to memorize the talk without looking at the presentation or my script. I made 20 index cards with 3-4 keywords to help me keep going when I’d start to stumble, and each time, I found myself using the cards less. By Wednesday, I was able to get through most of it on the train. Over Wednesday evening, I started measuring it with the presentation timing, and it was pretty much spot-on. Doing that part over and over showed me where I was likely to run long, and where I had room to futz. I even made myself a cocktail and practiced it a little buzzed, just in case I went on stage last.

Thursday, I had a whirlwind day of other speaking gigs, so I didn’t get that much time to practice during the day. The hour or so before the show, though, I went over to the Bowery Poetry Club. I used to work there, so as long as there’s no one using the stage, friends are sort of allowed to use it for unofficial practice space. This helped me get used to the lights, as well as the distractions of people walking around, talking, etc., through my spiel.

By the time I arrived at Galapagos, my brain was pretty much fried and I found it impossible to keep practicing. Thus, I unleashed my nervous energy being super chatty with my fellow speakers (thanks to Noel and Andy for humoring me, heh). I also found out I was going on first– this panicked me initially, but then I realized I could (a) get it over with, and (b) not have to worry about following someone truly spectacular. (And whew, because there were some rockstars last night!)

Then, the big moment came, and there I was onstage. Once it got going, I was shocked to find it rolling out of my mouth. I worry that it sounded *too* rehearsed at times, but mostly, I’m really pleased with how I did. People laughed at the things I hoped they would, and many have reported back that they really enjoyed it. Looking forward to sharing the video with you all!