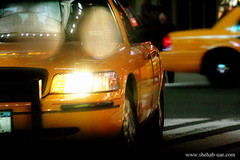 This is normally one of those things that I’d just twitter about and leave at that, but the whole scenario ended up being too fascinatingly hilarious to just let lie. Cyn and I went to the best live show tonight– we saw The National at Summerstage. I mean, it was just unbelievable. One of those shows that instantaneously makes you high because it’s Just So Good.

Afterwards, we were both starving and thinking of heading down to Schiller’s for a burger and cocktail (her: tuna, me: glorious beef). The train was going to take about a jillion years at that hour, so we figured we’d take our chances and see if we could get a cab. It wasn’t easy going: thousands of people pouring out of the east side of Central Park, all scavaging for the same four wheels.

I took to walking down the middle of 72nd Street. (alright, I’m exaggerating. I was walking in the middle of one of the lanes.) It was more than competitive out there– people were really throwing themselves into it, and I figured I had to step it up. As we rounded the corner towards Park Ave, a lovely lit-up free cab sat waiting. I scooted, nay, I dashed, for the cab.

From behind me, I heard a war cry. An actual war-sounding cry. I’m sure this was meant to intimidate, and not… well, inspire, but I escalated and cried back, running faster for the cab and diving to the door handle without even looking to see who or what my competition was.

When I did turn around, surprisingly enough, the young man capitulated immediately and said, “No no, go ahead.” Cyn was squealing with mad delight at the entire scene. I hadn’t come off my adrenaline yet and didn’t know what was so funny. I kindly asked the young man if he’d like a ride downtown. He backed away slowly, smiling, “No no, really, there’s four of us.”

In the cab, it still took me a minute to realize the scene that played out. Cab. Desperation. Dash. War cry. Louder war cry, FTW. It was a glorious moment of New Yorker-ness.